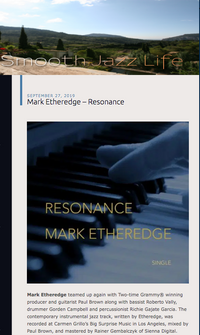 In physics, resonance is a phenomenon in which a vibrating system or external force drives another system to oscillate with greater amplitude at speciﬁc frequencies. (Source: Wikipedia) “I think as humans, we all have opportunities to resonate with each other–to be in tune and ﬁnd peace with each other – if we want it enough,” says Etheredge. “Resonance ﬂirts with that possibility.”