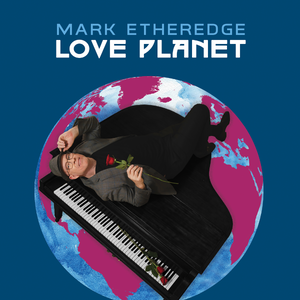 A few years ago I discussed the debut album 'Connected' by American smooth jazz pianist Mark Etheredge. His new album has become a triumphant tale of resilience, as since his debut Mark became addicted to alcohol, even went bankrupt and had to give up his home in West Hollywood. He moved in with a friend around San Francisco Bay, and last year saw his mother slowly go through Alzheimer's disease. However, Mark overcame it all, lives back in West Hollywood, and has been sober for 14 months. He started composing again and now delivers us this beautiful album. Before that, he teamed up again with Grammy Award winning producer/veteran Paul Brown. The single 'Resonance' was released in 2019, and 'You&Me&We' followed last year. In addition, there are 8 new jazzy tracks, including the title track, which now appears as a single. Mark also incorporated R&B and Latin rhythms. That title track opens this album by the way, and is about love for your neighbor as well as for yourself. On 'Untethered' he celebrates his victory over his alcohol addiction, with the help of guitarist Steve Oliver, about which he said: “I literally drink my money away. During the pandemic, I finally accepted that I had a problem with alcohol. I got help. This song expresses my gratitude and joy to be free, one day at a time.” Tenor saxophonist Greg Vail can be heard on 'Groove City', inspired by the rhythms of urban life, followed by Latin reigns supreme on 'Saucy' with contributions again from Greg Vail, trumpeter Ron King, as well as guitar licks from Paul Brown. 'We'll Make It Through' is about persevering, something that Mark can speak to, while 'Elated' also reflects that elated feeling about his resurrection. Interpersonal connections and attunement form the basis of 'Resonance', about which Mark said: “I think as humans, we all have opportunities to resonate with each other - to be in tune and find peace with each other - if we want it enough. ” Inspired by the war in Ukraine, Mark wrote his quiet plea 'Peace', followed by 'You&Me&We', on which Paul Brown can also be heard. It is again a call for a peaceful society, where we must think not only of ourselves, but also of others. And 'Golden Hour' closes with a memorial to his late mother, a former music teacher and choir director. This has become a beautiful album! I'm glad Mark is back and overcoming his problems. Because we can use such beautiful music!