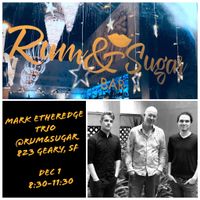 Etheredge’s latest project is “Connected” — a contemporary jazz album featuring ten originals composed by Etheredge including two in collaboration with featured guitarists Paul Brown and the late Chuck Loeb. It took radio programmers no time at all to add the title cut to playlists, swiftly propelling it into the No. 1 spot on RadioWave chart and No. 6 on the Billboard singles tally. The collection was produced by two-time GRAMMY® winner Paul Brown.

“As easy as the music flows, Etheredge’s playing is far from simpering or simplistic. He knows how to play the deeper grooves.” - AXS

“Music that celebrates the optimism that comes with a positive human connection.” – Soul and Jazz and Funk

Etheredge grew up surrounded by diverse music. His mother was a school music teacher and choir director, and for much of his life, his father was a Methodist minister. Etheredge studied jazz performance at De Anza College and San Jose State University. On his musical journey, he absorbed a wide spectrum of genres including jazz, pop, classical, rock, gospel, blues, R&B, Afro-Cuban, and Afro-Brazilian styles.